The management of this Subway found reason to put up a rather strange sign. It makes you wonder what might have happened here that made printing such a sign necessary in the first place. Do you agree with the owners? Are they entitled to ban paying customers from using Ouija boards in the building? Or do you think the sign will backfire and if anyone wanted to stir up trouble for them that they will anyway?

What’s the strangest sign you’ve ever seen posted in public? 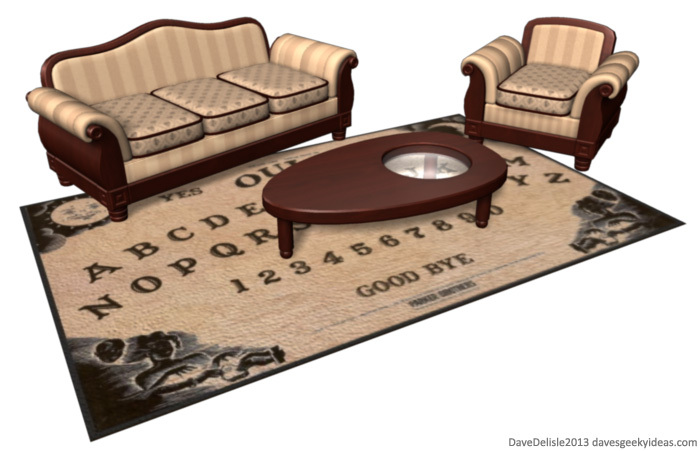 Sadly this set of coffee table, rug and chairs isn’t a real thing. It’s a concept done for Halloween by Dave Delisle. Inspired by the likes of Supernatural and Buffy, these chairs are for geeks and paranormal fans who can afford posh furniture.

Dave suggests that the wooden table would be on wheels and that the carpet would need to be as large as possible. The Ouija board is a far nicer design than something like Monopoly or Risk.

If this was a real thing – how much would you pay to have it?

The divination art which places a cock or hen in a circle of grain and letters of the alphabet. Letters near to where the bird pecks are assembled to form answers to specific questions. If only a yes/no answer is required then only two piles of grain can be used.

Aleuromancy is a divination art which uses flour. Sentences are written on slips of paper which are then rolled into balls of flour. The collection of flour balls is mixed nine times and then handed out to the aleuromancy participants to learn their fate.

Alomancy is a method of divination which studies patterns in trails and spills of salt.

A divination art used to determine whether someone is guilty or not. A barley loaf is specially prepared and fed to the subject. If the subject suffers indigestion then this is a sign of guilt.

Divination by numbers. Practitioners use techniques closely related to numerology. The term comes from the Greek ‘arithmos’ (number) and ‘manteia’ (divination).

The divination art which studies the wind and cloud shapes. It is related to Aeromancy.

Axinomancy is a divination art which uses a heated axehead in the embers of a fire. Axinomancers are able to use the axe in other ways in order to make predictions or answer questions.

The divination art which uses feathered arrows. Arrows are shot with messages attached to them and the arrow which travels the farthest is said to have carried the most significant message.

Cartomancy is a divination art that uses cards or playing cards. Tarot is, in fact, a form of cartomancy.

Melted wax poured into cold water and allowed to congeal. The divination is determined from the shape of the hardened wax.

Chiromancy is an alternative name for Palmistry.

A set of divination arts which make use of a key. One method of cleidomancy involves placing a key in an important book, hanging the book so that it may turn and twist and then studying the movement of the book.

A divination art which uses rings to answer questions or make predictions. Rings may be used as a pendulum or dropped into a bowl of water.

The divition art that which studies entrails. This art was probbaly used heavily in and before the Roman period. Roman extispices were augurs.

A Scottish divination art in which a seer would fast before the first Monday of the quarter and then stand blind-folded on the doorstep at sunrise. After an invocation the seer would remove the blindfold and make a prediction based on the first thing he or she saw.

A divination art which uses methods from the Kabbalah and the Hebrew alphabet.

Gryomancy is a divination art in which the diviner walks or spins in a circle of letters until they are unale to continue. The letters which the gryromancer stumbles towards are collected and used to spell out answers.

A collection of divination arts which use water to answer questions or make predictions. Boiling water is sometimes watched for patterns or sounds. Dish water can be studied for swirls and patterns. Sometimes pebbles or rings are dropped into a bowl and the ripples studied.

Necromancy is the black art of raising spirits and the reanimation of bodies. One aspsect of necromancy is divination; either through studying bones or entrails, listening to the whisper of spirits or raising the dead and communicating directly with them.

The divination art of dream interpretation. Oneiromancy sometimes uses ‘incubatory sleep’ where after a purification ritual the questioner would sleep in a special room or cave. Narcotic substances were also sometimes used. The diviner or mystic would then help the questioner understand the dream.

A board and pointer used in divination with the spirit world. The name comes from the French ‘oui’ (yes) and German ‘ja’ (Yes).

Similiar board instruments have been used in ancient Greece and China. The Planchette, a similar device, reached Europe in the middle of the nineteenth century.

A divination art which involves the study of lines and bumps on fingers and palms. Palmistry is also sometimes known as cheiromancy.

Scrying is a divination art that typically uses a crystal ball, mirror, shiny stone or surface. The tool used is referred to a speculum. Doctor John Dee’s speculum was a crystal egg and black obsidian mirror.

Have you found this list helpful? Please feel free to suggest additions, extensions or corrections!