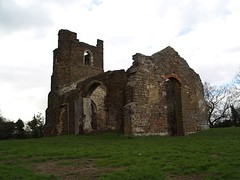 The ruins of the church on Clophill are around 400 years old. St Mary’s church was abandoned in 1848 when a Victorian replacement was build in the centre of the nearby village.

Local folklore has some interesting tales as to why the church was left and a new one built.

One rumour suggests that the church was the wrong way around, facing away from God instead of towards God. It was said that this error had forced the church into becoming a holy building for Satan rather than God.

The church is believed to have been built on top of a leper hospital which was run by monks.

The church is sometimes described as being on Deadman’s Hill. This is not correct as Deadman’s Hill is by the A6 road rather than Clophill Village.

Some of the confusion of the church’s location relates to a horrible murder in 1961 when Michael Gregsten was killed at Deadman’s Hill. James Hanratty was found guilty of the murder and hanged. Many believe that Hanratty was innocent.

There have been reported incidents of satanic rituals at Clophill. In 1963 the grave of an apothecary’s wife was broken into, bones removed and placed in a ritual formation in what was once the nave of the church. Bones where again taken from the graveyard on the hill in 1969 and once again ritualistically arranged.

There a number of reported sightings associated with Clophill Church. Many visitors report a chilly and oppressive atmosphere at the church even during warm days.

Visitors report watching a faint light moving up the hill and towards the ruins of the church before vanishing.

The ghost of a monk has been sighted at Clophill Church but some paranormal investigators have also used projections of a robed monk to scare curious teenagers away from the runes.

What do you think about investigators using the monk projection to keep local kids away from the hill? Have you been to the ruined church and experience the familiar chill?