Discover Japan and the iconic Odawara Castle are running two sets of online experiences for visitors around the internet to take part in.

“Japanese Castle and Ninja Culture” and “Mindfulness Meditation with Japanese Monk” start in October and will carry on until March. Neither of the events is free.

You can find more about this event at the officially run Discover Japan site. That’s also how you can reserve your online spot.

Using Zoom, you’ll meet a ninja scholar and historian for a walk around tour of Odawara Castle. During the session, you’ll learn about the role the castle played in Ninja Culture, the techniques used hundreds of years ago and see some traditional tools.

The session is hosted by Hiroshi Jinkawa, a sensei with years of experience. You can book online.

This 90-minute online meditation takes place with a monk at the top of Odawara Castle, outside of the usual hours, so quiet there.

A chance to forget about your daily burdens, you will spend time together with Tomoni Iwayama, a priest from the Ganshuji Temple. You’ll be with people from different backgrounds and all walks of life, virtually.

With Iwayama’s teachings, you may be able to clear your mind and rediscover human potential. Sign-ups are open at Discover Japan.

What do you think about this use of technology and tours of historic Japanese life? A clever way to support the Castle and its courses through a troubled period, or does it feel wrong?

Saint Vitalis of Assisi is an interesting patron saint. As a young man Vitalis was a sinner; he was especially fond of sex. However, he found an alternative path by going on pilgrimages across Europe, becoming a Benedictine monk and living as a hermit without money.

Saint Vitalis of Assisi is the patron saint of sexually transmitted diseases. That’s right, Vitalis is the saint of STD.

A decapitated head, believed to be Saint Vitalis of Assisi, will be going on auction in Ireland this Sunday. You can see the lovely item in the picture with this blog post. The auction house, Matthews Auctions Rooms, believe that the skull may be sold for around $1,650. Why so low? They’re not entirely sure if this is actually a relic of a saint – they can’t confirm the skull really is Saint Vitalis of Assisi.

What do you think about the skull? Would you bid for it? How much would you pay to own the decapitated head of the patron saint of STDs?

An expedition led by Michael Eisenriegler has found the Buddhist relics which belonged to the 19th century Buddhist master Danzan Ravjaa. The relics, which include statues, art work, manuscripts and personal belongings, were hidden in the 1930s during Mongolia’s Communist purge. Hundreds of Buddhist monasteries were destroyed and looted during this time.

In order to save the relics from destruction they were hidden in a total of 64 crates. These crates where buried in the Gobi Desert by a Buddhist monk called Tudev. Tudev passed the secret of the relics’ locations on to his grandson who was able to rediscover some of the boxes in 1990. Michael Eisenriegler’s expedition has unearthed two more of the historically and religiously important crates.

Eisenriegler told the BBC World Service, “It is of tremendous value for Mongolian culture because Buddhism was almost extinct in the Communist times, especially in the 1930s.

It is thought that as many as 20 crates may still be hidden in the desert.

What do you think should be done with these relics? Do they belong to Tudev’s family?

Acaster Malbis is a village less than ten miles away from the historic city of York. It is thought that the village’s name may come from a Roman settlement. The word ‘castra’ means ‘camp’ in Latin and perhaps Malbis relates to the land-owning Malbis family who lived there.

The new owners of The Shop Inn by the River Ouse have reported a number of ghostly incidents. It is thought that the pub is haunted by Bob the Stoker, a regular of the inn until his death. The fire in the pub has been reported as lighting itself – despite having four pints of water poured on it. The nickname “Bob the Stocker” was given to Bob, who died 50 years ago because he would sit and constantly stoke the same fire.

The new pub manager, Alan Deans, told local press that a lamp has also been known to fly off its shelf in the bar.

The Ship Inn’s owner, Carol Temple, has also admitted to the press that she has had her own ghostly encounter, “I had bent down to get something out of a cupboard and I felt a cold shiver, so I stood up and turned around and I saw a grey figure coming past me – it was only about a foot away from me.

“I was terrified. It was a dark grey figure. I wouldn’t describe it as mist, it was more like smoke in the form of a tall male.”

The story was covered by York’s The Press newspaper but received a strong degree of negativity from readers. One reader, known as yorkred, wrote; “Message to Owners of Ship Inn, Be warned your managers are liars. Never good for business”

The Ghost of Sister Hylda and Friar John

The most widely known haunting at Acaster Malbis is that of Sister Hylda. In the thirteenth century, Acaster Malbis was the location of a monastery and a Convent of Nuns of the Cistercian. Legend suggests there were underground passages that connected the two buildings.

It is said that Lady Abbess of Nun Appleton called upon the Archbishop from Cawood, and the nuns of St. Mary’s Abbey to conduct high mass on the eve of Saint Mark‘s day in order to put to rest the wandering spirit of Sister Hylda. Sister Hylda’s ghost had been haunting the convent and monastery as well as the adjacent areas for seven years.

The story tells of how the monks and nuns chanted at the altar and the arrival of a mysterious grey palmer.

At the end of the encounter, the ghost of Sister Hylda appears before the nuns and the Archbishop. She explains;

“In me behold Sister Hylda, dishonoured, ruined, murdered by Friar John, in the deep penance vault. He stands by my side, and bends his head lower and lower in confession of his guilt. I died unconfessed, and for seven years has my troubled, my suffering spirit walked the earth, when all were hushed in peaceful sleep but such as the lost Hylda. Your masses have earned grace for me. Seek the middle pavement-stone of the vault for the mortal relics of a soul purified and pardoned by the blood of the Redeemer. Laud and blessing to his gracious name for ever!”

What do you think of the story from The Ship Inn? Is this a fabrication designed simply to lure in tourists or this is the latest haunting at Acaster Malbis? 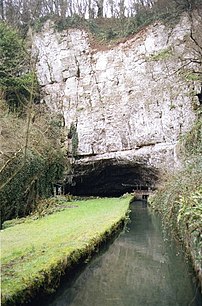 The ruins of the church on Clophill are around 400 years old. St Mary’s church was abandoned in 1848 when a Victorian replacement was build in the centre of the nearby village.

Local folklore has some interesting tales as to why the church was left and a new one built.

One rumour suggests that the church was the wrong way around, facing away from God instead of towards God. It was said that this error had forced the church into becoming a holy building for Satan rather than God.

The church is believed to have been built on top of a leper hospital which was run by monks.

The church is sometimes described as being on Deadman’s Hill. This is not correct as Deadman’s Hill is by the A6 road rather than Clophill Village.

Some of the confusion of the church’s location relates to a horrible murder in 1961 when Michael Gregsten was killed at Deadman’s Hill. James Hanratty was found guilty of the murder and hanged. Many believe that Hanratty was innocent.

There have been reported incidents of satanic rituals at Clophill. In 1963 the grave of an apothecary’s wife was broken into, bones removed and placed in a ritual formation in what was once the nave of the church. Bones where again taken from the graveyard on the hill in 1969 and once again ritualistically arranged.

There a number of reported sightings associated with Clophill Church. Many visitors report a chilly and oppressive atmosphere at the church even during warm days.

Visitors report watching a faint light moving up the hill and towards the ruins of the church before vanishing.

The ghost of a monk has been sighted at Clophill Church but some paranormal investigators have also used projections of a robed monk to scare curious teenagers away from the runes.

What do you think about investigators using the monk projection to keep local kids away from the hill? Have you been to the ruined church and experience the familiar chill?

It was on the 10th of December in 1520 that Martin Luther, a German monk, burnt the Papal Bull in Wittenberg.

In so doing so, he sealed his ex-communication from the Roman  Catholic Church.

Martin Luther, Father of Protestantism, changed the course of western civilisation with ideas that directly influenced the Protestant Reformation. Luther challenged the Pope and the Vatican by rejecting them as an infallible religious authority. Martin Luther held that the Bible was the only truly infallible religious authority, that salvation is a gift of from God and that is received only by through true repentance and faith in Jesus the Messiah.

Martin Luther translated the Bible from Latin to German so that the common people could read it for themselves. This had a huge impact on German culture and the Church. His work influenced the English translation of the King James Bible, also.

It was at the Diet of Worms in 1521 that Luther was finally excommunicated from the Roman Catholic Church. He refused to accept the authority of Holy Roman Emperor Charles V and was declared an outlaw as a result.

Martin Luther’s views on Jews remain hugely controversial as he stated that their houses should be destroyed, their synagogues burned, money taken away and liberty removed.

There can be no doubt that Martin Luther was a hugely important figure in world history and on religion but is his significance over stated? Are is reported views on Judaism mis-represented?