They used an x-ray machine to show how a human body moves during yoga and then animated those x-rays to produce this video.

Are you impressed? Do you think this shows yoga is helpful to the body or do you think some of the shapes are worryingly awkward when we can see them in x-ray.

If you want to learn more about yoga then sites like Yoga Download might be helpful. You can access hundreds of online courses from there. If you’re already well in to your yoga then sites like Everything Yoga offers a range of yoda clothes while in the UK Yoga Direct has a similar collection of newcomers and experts.

This video shows the amazing yoga-esq routine of Arthur Cadre. The music is by Awolnation (the track called Sail). It’s fantastic.

The performance sets the bar extremely high for anyone who wants to demonstrate a supple body and ability to move to music.

What did you make of the video? Impressive or over done?

Have you ever tried to do yoga at home? Have you tried it despite the interest from your pet?

This video not only shows a cute kitty getting involved with a yoga workout but also shows how cat yoga is entirely possible and might actually help with your posture.

What do you think? Is there any room in yoga for feline friends?

This is a must watch film; even if you’re a little bit scared of zombies. In fact, this short 97 second clip, will probably help you deal with your zombie fear.

The question is; how on earth do we encounter both zombies and yoga in just 97 seconds of footage?

Does this work for you?

Jeff and Becky take us through the Body Oneness program. It’s based on Yoga. It’s inspired by…. well, that’s the problem. Is this really how people see Yoga and other techniques?

Take a look at the video below, sound is required and let us know – funny or annoying?

Even if you find this annoying… it’s clearly meant as a joke. It’s also rooted in truthful observations of how some sessions are run. What does that say? Or do you disagree?

Should Christian’s do yoga? This is a question raised by the Christian Broadcast Network who suggest many Christians grapple with this idea. They point out that yoga isn’t just exercise as it has a spiritual component.

Although much of the yoga in United States has been stripped of its Hindu origins there are American Christians – like Dr Albert Mohler – who are suggesting the practise should be avoided altogether.

The CHRISoga movement is an attempt to merge Jesus and Christian worship with yoga exercise. It’s featured at the end of the video but without commentary.

END_OF_DOCUMENT_TOKEN_TO_BE_REPLACED

Sian Barr, a student veterinary nurse, has carried out research on sick cats being treated at a vet’s sugery. Miss Barr, a recent graduate with a first class honours, concluded that yoga medication music can help. Cats become less stressed when they listen to the music.

Stress in small doses can be a good thing, such as if a cat is under stress to eat, then it can perform better.
“But otherwise, it will have a negative effect, such as in a veterinary practice.

“This is because a cat is in a cage and isn’t able to do what it would like to do, so stress levels will increase and it will become wound up and angry.

“This is bad for not only its behaviour, becoming difficult for staff to handle, but also for its immune system and ability to heal.

Barr measured the ear and eye activity of the felines in order to determine how stressed they were as well as monitoring respiration levels. A control group was not exposed to the music. The other group was treated to the yoga relaxation music and Om Shanti tunes.

Sian says the effect was dramatic.

What do you think? Have you seen your cat react or chill out to any of your music collection before?

A recent Indian court ruling which legalises gay sex has been challenged by Swami Baba Ramdev. The TV star and popular yoga expert claims that the Delhi courts have made a mistake in decriminalising – what he describes as – “unnatural sex acts”.

Writing to the Indian Supreme Court, Ramdev said, “It can be treated like any other congenital defect. Such tendencies can be treated by yoga, pranayama (breathing exercises) and other meditation techniques,”

The Indian legal system allows anyone to challenge a court’s decision by raising the matter to a higher court. Swami Ramdev is already on the record as describing homosexuality as “mental bankruptcy” and “against God and creation”.

Ramdev is not the only Indian guru to have filed against the petition. The famous astrologer Suresh Kumar Kaushal’s petition to the court suggests that if gay sex is legalised that, “tomorrow people might seek permission for having sex with animals”.

What’s your view on this? Are you surprised a yoga guru is so homophobic? Do you think this will reflect badly on yoga? Perhaps you think it’ll reflect well on yoga? 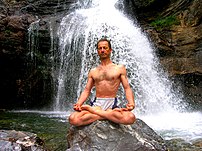 The world’s largest aquarium contains 8 million gallons of water and is home to more than 80,000 animals.

In an attempt to keep visitors coming in despite the incredibly tough economic climate the aquarium has combined two remarkable things; beluga whales and yoga.

Weekly yoga sessions are now held in front of large aquarium windows through which the graceful, smooth and apparently slow-moving whales can be seen. Todd DeLaune, who leads some of the yoga classes at the aquarium, told CNN that he believes the belugas react to the practice sessions too.

What do you think of aquariums? Are they a force for good, for bad or does it depend on the aquarium?

Would you pay a little bit extra in order to practise your yoga in front of some smiling beluga whales?