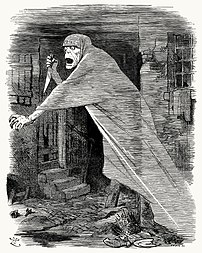 Bidston, just west of Birkenhead and south of Liverpool, is an area of Merseyside with a dark history.

One of the worse murders of the 19th century can be attributed to the area. The discovery of the remains a family of five was found buried in the cellar of a building near Rain Hill. Emily Williams and her children; Bertha, Marie, Lilla and Syndey had been cruelly butchered.

Suspicion soon fell on the surviving member of the family – the father and husband – who had fled. Police investigated and discovered that Williams had a dark past. Williams true name was likely to be Deeming. Deeming was also suspected for murder – his wife Marie. He had grown up in the Bidston area of Birkenhead before going on to travel the world and using such esoteric aliases as Baron Swanston.

Journalists writing at the time compared the knife slayings to those of Jack the Ripper in Whitechapel just a few years earlier. Some papers even speculated that Williams/Deeming may have been Jack.

The area also has associations with witches and witchcraft. Alex Sanders – who was born Orrel Alexander Carter in 1926 at Birkenhead – was known as King of the Witches. Alex Sanders practised a form of witchcraft that was a blend of Crowley’s magic and Masonic symbolism.

Bidston Hall has a history as a Masonic Lodge.

Alex Sanders once attempted to summon a demon in front of an audience at the Hendon Classic Cinema, London, in 1971. The stunt went wrong and Sanders blamed the failure on one of the audience members wearing a silver Christian cross. To this day some people suspect that that audience member was none other than Sean Manchester

Bidston Hill sits on top of a warren of tunnels. Some suggest that these tunnels are used to connect the houses of witches together and that the cellar of Bidston Hall acts at the nexus.

Visitors to Bidston Hall’s bedrooms – especially women – have reported unwelcome attention from paranormal entities during the night. Could this be Williams/Deeming again? He certainly seemed to favour women.

Other guests wake only to discover that they cannot move with some feeling an oppressive weight on their chest or a force holding them down.

The Bidston Hall cellars are also reported to be haunted. Mediums have suggested that the lodge has been the scene of more than one death.

Do you think Bidston Hall could be haunted? Or is the building simply unlucky with its association to withcraft, Alex Sanders and his demon summoning attempts?

The Williams/Deeming murders are only a few years removed from the Whitechapel murders. Whereas both used knives and Deeming seemed to target women… was the Press right to speculate that there may have been a connection?

Most Haunted Live visited Bidston Hall (but called it Bidson Lodge) in January 2009. This post was published before the program aired but we welcome any insight or opinions from any of the audience.