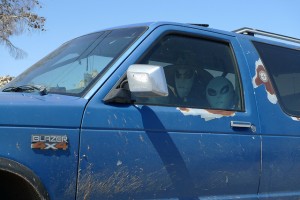 Drivers in Penn, a suburb in Wolverhampton now have to be extra careful that they’ve successfully locked their car before leaving it alone. Residents claim that their key fobs, remote locks for their cars, are misfiring and failing. Some speculate whether car thieves have smuggled a jamming device into the area.

Residents have said that the very same key fobs work perfectly once they’re taken out of the area. Locals Darren Cowan and Kay Sedgwick both confirmed to the Express and Star, the local paper, that their own cars and key fobs have had problems.

However, Conerstone – a health and science specialist – who manage the phone masts for companies like Vodafone and O2 has said it is unlikely to be these transmitters blocking the key fobs.

All Vodafone base stations are compliant to the European Commission regulations on electrical interference.

Others have suggested that a faulty TV sender or even faulty alarm system that operate on wireless signals may be able to block key jobs.

Do you live in the area? Can you confirm the strange behaviour of key fobs?