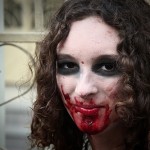 Dyfed Powys Police in Wales have reported a list of supernatural and paranormal events they have been called out to investigate.

The list includes 26 ghosts, 20 UFO sightings, 11 witches, two vampires and two zombies. In none of the cases did Dyfed Powys Police find any evidence of supernatural or paranormal activity. In one case a zombie was a character in a horror film.

The list comes from the police force in response to requests made under the Freedom of Information Act. Over the last five years, there have been more than 3,300 requests of information and Dyfed Powys Police say that it has cost more than £500,000 to provide this information.

The relevation comes at a time when we are beginning to see reports in British media that ghost hunters are costing councils hundreds of thousands of pounds with paranormal based Freedom of Information act. Earlier this month the BBC reported that Cornwall Council had spent £340,000 responding to ghost hunters and others.

Dyfed Powys Police were also asked how many of their officers were Pagan but could not respond as they do not record Pagan or any derivative (Druid, Wiccan, etc) as a religion.

Do you think paranormal investigators need to exercise self restraint when it comes to invoking the Freedom of Information Act? Or are these queries exactly the sort of public insight that the Act is designed to protect?