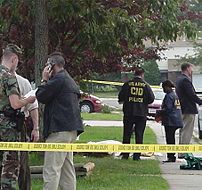 Psychic criminology has grown since World War II, has had a number of public successes with some celebrity psychics but remains controverial.

Psychometry is the main psychic technique used in psychic criminology and the investigator will handle a number of objects such as suspected murder weapons, items belonging to the victim or in some cases the suspect. Dowsers are also sometimes used to locate missing people, items or locations.

Vanga Dimitrova is an example of one of many successful investigators. The blind Hungarian became a State employed psychic in 1966 after successfully helping in dozens of investions and being tested by government researcher Dr Lozanov.

What do you think? Should police forces make more use of psychic criminology? What about homeland defense forces?