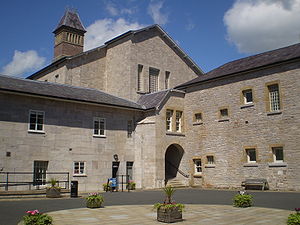 Ruthin is an old town in North Wales. Ruthin Castle was built by Edward I in the late 13th century. The castle was ruled by the Grey family up until 1646.

The Old Country Gaol or jail was constructed in 1775, designed by J Turner to serve the whole of Denbighshire. It is believed, however, there has been a gaol of sorts in Ruthin since the 14th century.

The last execution took place at Ruthin Gaol in 1903 and the building closed as an active gal in 1916.

On 17th February in 1903 William Hughes was hanged in the jail and his body buried in the grounds. Hughes, from Denbugh, had fought with the British army in India, separated from his wife in 1901 after the death of one of their children.

William was prosecuted for “family desertion” and in 1902 was sentenced to three months in the gaol. He was released in November 1902, procured a double-barrel gun, went to the home where his wife was working and shot her dead.

Hughes surrendered to the police. Despite a plea of insanity he was found guilty of murder, the jury taking only ten minutes to decide his fate.

He was executed at 8 o’clock in the morning and it is said the last thing he did before his death was look at a photograph of his family.

It is widely believed that William Hughes haunts Ruthin Gaol to this day. Women are especially prone to sensing his presence.

Another commonly sensed spirit within the gaol is John Jones (aka Coch Bach Y Bala) who was shot in the leg during an escape attempt in 1913.

Perhaps the most dangerous ghost believed to linger in the gaol is William Kerr. Kerr was a gaoler at Ruthin who was popular among the staff but hated for his cruelty by the inmates. Kerr would frequently starve inmates if they did anything he disliked. He was known to beat and whip inmates for minor infringements of the rules.

Kerr vanished from Ruthin without explanation and was never seen again.

Ruthin Gaol allows organised paranormal investigations and ghost hunts. Have you taken part in one of these? Did you encounter any spirits?

%d bloggers like this:
You must accept three things before you explore the site;
🍪 We use cookies and you control them with your browser. 🍪
💰 Some links may earn us an affiliate commission. 💰
😇 You will treat yourself to one extra positive thought today. 😇