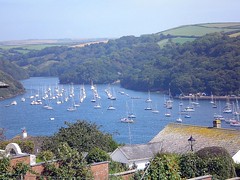 The Fowey Hotel was founded on paper in 1882. After difficult negotiations over land rights, however, the first stone was laid in 1883 after the directors, Dr Davis, William Gundry, Thomas Gundry and George Bate secured the necessary funds including a £1000 subscription from the Great Western Railway.

From the outset the seaside hotel was popular with early travellers on the railway. Guests would be met by horse drawn carriage as they disembarked the train and taken up to the hotel.

The ancient village of Polruan can be seen over the harbour from Fowey.

It is said that St Finnbarr passed through Fowey early in the 6th century. The first church dedicated to the saint in Fowey was destroyed by the French in the 15th century but rebuilt by the Earl of Warwick.

During the Second World War Fowey was a base for air-sea rescue and acted as one of the launch sites for the D-Day landings.

Today Fowey remains a popular holiday spot in Cornwall and is home to over 7,000 private boats. The harbour was the first in the “Marina” category to be awarded a blue flag in Britain. The town is home to a number of affordable and ethical holiday* options.

It is said that the restaurant in Fowey Hotel is haunted. Visitors sensitive to spirits have reported seeing a man – perhaps a soldier or a sailor – in a state of distress and pleading his innocence.

The third floor hallway is also believed to be visited by a ghost as guests have reported the sounds of footsteps in the night.

Could Fowey Hotel’s wine cellar be haunted? Some have suggested the room is unusually cold and that a dark presence can sometimes be felt in the corner.

Have you stayed in the Fowey Hotel? Did you encounter anything unusual? We’d love to hear about your experiences.

Disclaimer: Links marked with a star(*) are revenue links.