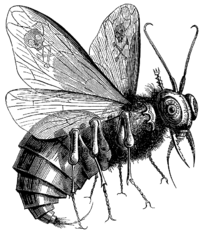 Abaddon is the name of the demonic entity which the Bible (Revelation 9:11) describes as the angle of the bottomless pit.

Abigor is a demon conjured for military assistance, advice and fortune telling powers.

Afrit, in Islamic lore, are giant and malevolent devil-djins. They are the second most powerful type of devil and may be related to ancient Egyptian spirits of the desert sandstorm.

According to Zoroastrain lore, Ahriman is the demon of lies and is trapped in never-ending conflict with Ahura Mazda. He is associated with the serpent form of Satan.

In ancient Greek the word Alastor was used to mean avenging god. Roman demonologists used the name to refer to the evil Genius of a house.

Apollyon is the Greek name for the demon Abaddon.

In Milton’s Paradise Lost Arioch is one of the fallen angels. The name is dervived from the Hebrew for ‘fierce lion’.

In the Aprocryphal Book of Tobit the demon Asmodeus is the personal tormentor of Tobias’ wife-to-be. In the Testament of Solomon the demon is one that conspires to plot against the newly married. Don Cleofas is taken on a night flight by Asmodeus in the literatury work Le Diable Boiteux (1707, Le Sage) which gives rise to the term ‘flight of Asmodeus’. In the book Asmodeus uses magic to allow Don Cleofas to see into the houses he flies over so that the inhabitants private lives were revealed to him.

In Paradise Lost Azazel is described as the standard bearer for the rebelling angels. In Islamic demonology Azazel is one of the Djin who was expelled from heaven for refusing to worship Adam.

Although the name Baphomet is sometimes used in conjunction with a demon it is more likely to be a variation of the word ‘Mohammed’ when the Knights Templar were acused of blasphemous worship.

William Shakespeare writes of Barbason  in The Merry Wives of Windsor. Some scholars suggest the name may have been taken from the Discoverie of Witchcraft (1584, Reginald Scot).

The name Baalzebub may stem from the Sryian ‘Baal’ and infer ‘Lord of the High House’ whereas Beelzebub translates as ‘Lord of Flies’. Beelzebub has come to be regarded as the leader of the fallen angels and the Prince of Devils.

In Shakespeare’s The Tempest Caliban is the half-human deformed offspring of the devil and the witch Sycorax.

The name Cambion was given in the post-medieval period to anyone  believed to the semi-human offspring either an incubus or succubus.

Lactantius wrote that Demogorgon was the chief power in Hell. The name was once kept a secret as to speak it was to invite disaster.

The name Eblis means despair. Eblis is the same as the demon Azazel.

The Book of Revelation describes Gog and Magog as the future enemies of the Kingdom of God.

Lamia is the name of a legendary queen of Libya who turned into a monstrous serpentine monster. The name became used as a synonym for a witch who could transform from demonic form to beautiful woman.

Lucifer means “Morning Star” or “Daily Star”. The name Lucifer has become synonymous with Satan – probably due to reads of Isaiah 14:12.

Mammon is the Syrian term for “riches” or “wealth”. The name was linked to demonic names in Matthew 6:24 and Mammon has now come to be seen as a demon of money.

In Faust, Mephistopheles is the devil. The name is Greek and means “the one who hates the light”.