Folktales of the Cryptids is a collection of short comic book horror stories. As the name implies, each story features a cryptid and the dangers of getting too close to one.

Joseph Oliveria wrote the cryptid stories and published them through Afterlight Comics the indie publisher he founded only in 2017. A Kickstarter raised over £3,500 to bring the comic to life.

Good question. You can expect to see brief sightings off the Mothman, Chupacabra, The Legend of Momo and The Pukwudgie.

The Folktales of the Cryptids review

There’s no messing around with this comic. Joseph Oliveria’s stories pack a punch, and it comes straight at you. Don’t expect much in the way of plot twists or deviations. Cryptids isn’t a comic book collection designed to drag your expectation around. This is a comic book collection written to be a homage to the legends and myths that have made these cryptids familiar.

And while there’s no messing around and there are plenty of straight up by the book plays you would be wrong to take the Folktales of the Cryptids for granted. The delivery is top notch, paced perfectly and concluded with a marksman like perfection.

I’m especially fond of the illustrations and colouring in the last tale – Romance is Dead – where Brendan Purchase drew and Roman Stevens coloured. There are some surreal touches.

There are some common strands in the four horror stories. We’re better off leaving the Cryptids alone. They’re probably better off if we leave them alone too. It also seems to be the case that whether you’re a good person or a bad person that bad things can still happen to you. It’s a cruel world out there. However, if you can keep your wits about you then, perhaps, you’ll have a chance.

While the four stories are each blessed with their own cryptid it is the human characters that give them life and interest. This might because the characters used in the adventures are familiar, don’t need an introduction and so we’re easily at ease with them. Where can I buy Folktales of the Cryptids

The comic book is available in stores in the UK. You can also buy it directly from Afterlight Comics.com.

Will there be a sequel?

Neither Afterlight Comics nor Joseph Oliveria has announced plans for a follow up. However, right now there’s a Kickstarter for a new series called Wendigo Wood. This Kickstarter is asking for less money and, at the current rate of pledges, will raise more. That’s probably a good endorsement of the quality of the previous work.

Are there any cryptid or horror comic book series that you will recommend?

In Pure Spirit’s copy of Folktales of the Cryptids was provided for review. 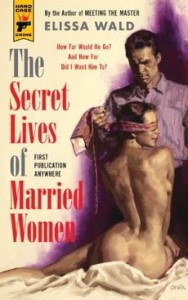 The Secret Lives of Married Women by Elissa Wald

I’ll be honest. I didn’t fully appreciate the scope and depth of this novel until I was part way through. And that is not at all because the panty dropping forays increased in intensity at that point.

Once into the meatier half of Elissa Wald’s book, I found myself drawing entirely new and startling conclusions about the protagonists, having been presented with familiar sensations in incredibly polarized situations. Even though I didn’t see myself as any of the characters, I saw myself in those pages. A massive achievement on the authors part.

The first half of the novel follows a woman named Leda and her… somewhat strained relationship with her husband Stas. I found this half – though delicious, somewhat difficult to assimilate. As if I were trapped somewhere between measuring the conflicts relative to Leda’s narrative, yet struggling to compartmentalize what she was feeling with how I thought she should be feeling, and reacting accordingly (a trap for the pragmatic, omnipresent reader).

The story evolves however, whether the reader is ready for it or not. An equally enticing and revealing look at Leda’s twin and opposite Lillian, and a woman named Nan quickly dispels the hazardously negotiated feelings of control and expectation the reader has garnered thus far.

I am loath to give away any details of the plot for fear of shattering the illusion cast upon the reader while gorging on this story, for the pinnacle of the writers success here is not only in the suspense, but the emphatic array of conflicting emotions that bleed through every page. The biggest surprise of all, being that you have soaked them yourself, regardless if you agree or disagree with the conclusions wrought by the characters.

Despite my subconscious attempts at distancing myself from the stories to discern their likely outcomes, or at least to anticipate the value of the problems they encounter, the very nature of the conflicts faced by Leda, Lillian and Nan elicits an intensive introspection that is not limited to an empathetic understanding of the direct problems faced, but encourages an unapologetic consideration of any situation in which your heart and your mind are at odds.

The meaningful and realistic way the author deals with the characters in the story is enchanting, and, truly, it did feel as if a spell had been broken when I closed the book and put it down. A part of me felt bereft. As short as the book is (and I believe it is best that way) there was a sense of loss – a directionless appeal for the clarity and comfort that the author manages to conceal between the lines.

Did you explore a deeper meaning in Wald’s novel?

Would you consider the book based on its psychological implications, the naughty bits, or both?

Disclosure: My copy of the book was provided for review. The Secret Lives of Married Women by Elissa Wald. Titan Books