Raynham Hall is south west of the town of Fakeham, just a few miles away from the silent town that the old RAF base at West Raynham has become, in Norfolk.

The story of ghosts and haunting at Raynham Hall may be one of the most famous in Britain. The Brown Lady is said to be none other than Dorothy Walpole – the sister of the first British Prime Minister Robert Walpole. Robert Walpole (1676-1745), once knwn as Sir Robert Walpole, is widely credited with being the first “Prime Minister of Great Britain” as we know the role today.

The famous photograph taken at Raynham Hall shows a ghost descending the staircase in the hall.

The legend begins in 1713 when Lord Townshend, owner of Raynham Hall, married Dorothy Walpole. She was Townshend’s second wife and, as rumour had it, the ex-mistress of Lord Wharton. Wharton’s reputation was terrible. It was said no lady was safe in is presence.

Dorothy Walpole, the second Lady Townshend, was buried in 1726. It was rumoured that the funeral was a sham, a staged theatre and that Lady Townshend lived on as a hostage in Raynham Hall. Locals said that “Dolly” Townshend was doomed to roam the stairs and hallways of Raynham all by night ever after.

There are mixed reports on how Dorothy Walpole died. Some suggest she starved to death after being confined or confining herself to her room, others suggest she fell – or was pushed – down the grand staircase at Raynham Hall. The same staircase the picture was taken. Was it murder? Was it suicide? There have certainly been deaths at Raynham Hall.

The official papers say tat she died of smallpox.

It is said that King George IV ( at the time still Prince Regent) saw the Brown Lady at Raynham Hall. He is rumoured to have awoken the whole house with the news that “a little lady al dressed in brown, with dishevelled hair and a face of ashy paleness’ who stood at his bed. George IV left that hall immediately.

Later, in 1849, Lucia Stone tried to speak to a lady watching him after he had finished a chess match against Major Loftus (a relative of Charles Townshend) but encountered only a woman, dressed in brown, with no eyes in her skull before she vanished.

In 1936, after the RAF Base at West Raynham had opened, two photographers were active in Raynham Hall. Captain Provand and assistant Indre Shira were talking pictures of the hall for Country Life magazine. It was early evening when Shira notice a misty form on the stairs. Shira alerted the captain so the cap could be taken off the camera while Shira triggered the flash. 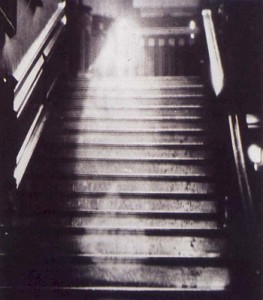 Country Life is said still to hold the original photograph.