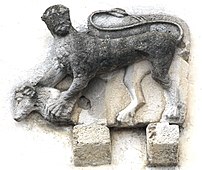 The manticore is a fierce monster and its name was once a literal translation of “man-eater”. The Roman scholar, Pliny the Elder, described the manticore in his book Naturalis Historia. The original tales of manticores come from Persia and the sub-continent.

The manticore was feared by the Indians and was believed to kill more humans than animals. The Greek historian Aelian writing in the 2nd century described how the manticore would wait in ambush for a group of two or three men before attacking. In return the Indians would hunt the beast from the back of elephants and with the aid of great spears. Young manticores would be found and crushed with rocks.

The prophet Jeremiah, from the Hebrew Bible, was represented through the manticore emblem. The beast was thought to live in caves deep in the earth and Jeremiah had once been through in a deep dung pit.

Ctesias describes the manticore has having three rows of teeth and a spiked tail. The tail was used as a whip and as a sling from which to launch poison tipped barbs. It was said to have eyes and ears like that of a man.

The manticore is often drawn as having a feline body and a human-like face.

Perhaps there are lessons we can take from the manticore today. As it was feared it was hunted and its young was killed… could this not represent a vicious circle of revenge?