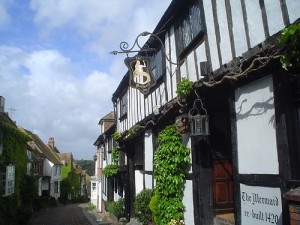 The Mermaid Inn in Rye is believed by many to be haunted. It certainly is a very old inn – with parts of it dating back to 1156 – and may well also have been used by smugglers. Rye was a booming harbout town in the 12th century and was held a Membership of the Cinque Ports. By 1300 The Mermaid brewed its own ale and was charging one penny a night for lodging. Rye was doing bery well, helping to repair the King’s Galleys and contributing ships to the Cinque Ports Fleet. In 1337, however, during a French raid every building not made of stone – which included the Mermaid – was burnt to the ground. The stone cellar survived and is now the oldest part of the building.

In the 16th century the Mermaid Inn was involved in hiding Catholic priests fleeing the Reformation. You can still see the forbidden letters J.H.S (Jesus Homnium Slavtor) carved in the wooden panels of one of the rooms.

In 1735 the Mermaid was scene of a historic brawl. The smugger Thomas Moore was released from jail on bail, collected some of his men and marched straight to the Inn where he captured the Bailiff of the Sheriff of Sussex, dragged him down to the harbour and to a ship. The Bailiff was rescued by the Commander of the ‘Amelia’, a Rye Revenue Sloop. By 1751 the famous Hawkhurst Gang of smuggers were frequent visitors to the Inn.

Hauntings at The Mermaid Inn

It is said that Judith Blincow, co-owner of the Inn, once found a couple of guests sleeping in on the couch in the lounge. According to local lore, the guests had seen ghostly shapes walk through the walls of the room and refused to return to their room.

Another Rye legend tells of the time when a medium approached a previous owner to discuss the idea of organising a ghost hunt. The medium walked around the inn and then returned to the bar to speak to the owner. Before anything could be said two ghostly figures appeared, duelled with swords before the ‘surviving’ spirit appeared to flee out the front door.

Others believe that the Mermaid Inn is haunted by a lady in grey, the ghost of a murdered chambermaid, killed by a smuggler concerned that she would reveal his secret. She is most often associated with room five.

Other sightings report that clothes, even those left by the fire, become wet – as if they had been drowned, bottles have flown off shelves, rooms suddenly get cold and chairs move by themselves.

Have you been to The Mermaid Inn in Rye? What was it like? Do you believe the reports that there may be as many as five ghosts haunting the building?