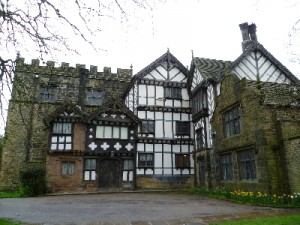 Turton Tower is a Grade I listed building as well as a scheduled ancient monument. It will open to ghost hunters for the first time this year; after refusing access to Most Haunted over concerns that filming equipment would damage the property.

It is believed that the de Lathom family occupied Turton Tower around the year 1200 – when it was part of the barony of Manchester. The famous pele tower was rebuilt by the Orrells in 1420. In 1628 Humphrey Chetham bought the tower. A few years later (1642) the Civil War broke out; Chetham sided with the Roundheads and allowed troops to be garrisoned inside the estate. The Orrells, however, were Cavaliers.

It is now owned by the Blackburn with Darwen Council.

In November and December of this year small groups of visitors will be given ghost tours. The tours range from 3am and 4am visits and are for 18+ only.

It is said that two skulls are kept in the Towers that have been linked to previous hauntings elsewhere – in particular the appearance of two ghostly men who appear to be duelling.

A woman dressed for mourning is said to stalk the staircase of the tower, sobbing and shuffling slowly. A security guard is reported to have gone to the aid of a woman leaning against a fence – only for her to disappear as he got close.

Have you been to Turton Tower? Do you think it’s haunted? Do you think the council are doing the right thing, raising money for its keep by letting ghost hunting tours inside?