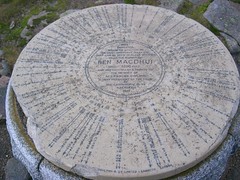 After Ben Nevis the mountain Ben Macdhui is the second tallest mountain in Scotland. It is part of the Cairngorms and popular with walkers and climbers.

Since the 1920s there have been reports of a creature on Ben Macdhui. It is known as The Grey Man or Fear Liath Mhor in Gaelic.

The account from 1925 comes from Professor Normal Collie when he spoke at a General Meeting of the Caringorn club in 1925. He spoke of an encounter on the mountain, when the mist was thick and heavy, and he was heading away from the summit. The professor had been on the mountain many times before but on this trip down the slopes and in the mist he could hear the sounds of a second set of heavy footprints. The time between each crunch was longer than is – as if to suggest much longer legs. The professor, alone, was overcome with terror and fled the mountain.

One of the reported abilities of Fear Liath Mhor is to create terror and some investigators speculate whether this is used to try and herd climbers off over the dangerous cliffs on Lurcher’s crag.

The author Ricard Frere has written of an anonymous friend who while camping on Ben Macdhui witnessed a giant brown ape-like creature making its way down the mountain. In 1945 Peter Densham, an experienced climber, reported hearing footsteps and also the compelling and irresistible feeling of panic. Densham also fled the mountain.

Have you climbed Ben Macdhui when the mist came in? Did you hear anything? Feel free to share any of your walking or climbing stories below.