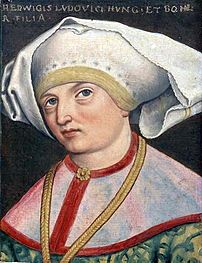 On the 16th of November, 1384, Jadwiga was crowned Queen of Poland. She would become Saint Hedwig; patron saint of Queens. Even though Jadwiga was only beautifed in 1980 she treated by many as saint from the time of death.

Known as Jadwiga in Polish the Queen was known as Hedwig in both English and German.

During her life Jadwiga took care of a number of monasteries and hermits – viting them and bringing them clothes and food. A number of miracles are associated with her.

Christ is said to have spoken to her from the the large black crucifix in the north aisle of Wawel Cathedral where she often prayed. The crucifix, now known as ‘Saint Jadwiga’s cross’ is still there.

Jadwiga is supposed to have given a praying stonemason some jewelery from her foot. Even though the plaster of the altar floor had hardened, it is said that her footprint was left behind when she left the church. The print, known as ‘Jadwiga’s foot’ is still visible in the church at Krakow.

Jadwiga died in June 22, 1399. She and her daughter were both dead within a month of a complicated childbirth.

In Jadwiga’s case there was nearly 700 years between her death and becoming a Saint. Do you think the Catholic Church could or should move faster than this? Or does speed not matter.