A French couple on holiday in the Highlands of Scotland claim they have managed to photograph a ghost.

The couple took the strange photograph on the high street of Fort William.  Sophie Mager and Remy Ruckey told press that they didn’t see the ghost themselves; it only became visible to them in the photograph.

They add that it was only after the photograph was taken that they discovered from locals the spot was the location of an old hanging tree – chopped down in the 1970s to make way for a new library.

It was said at the time that cutting down the ancient tree would bring about “Buidseachd” (pronounced Bootchach) the Gaelic name for a curse.

Staff in the library now on the scene have reported hauntings; boos, paintings an pot plants throwing themselves in to the floor and the sound of dog snufflings even though there were no animals in the building. At one point library workers fled the building when an electric typewriter started to print its letters upside down. 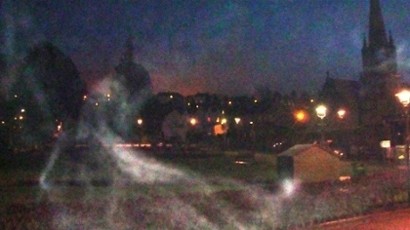 Do you think Mager and Puckey have managed to capture the ghost of the old Fort William hanging tree on camera? Or is this a genuine mistake? A con?