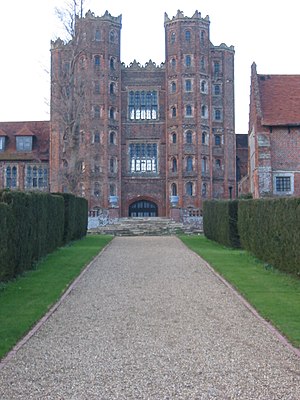 Layer Marney Tower in Essex is an impressive Tudor building. Construction was begun by the first Henry Lord Marney but he died in 1523 before the project was finished.

Layer Marney Tower was inspired by Henry VIII’s belief that a building should reflect the status of its owner. It is said that Lord Henry, 1st Lord Marney’s tomb is the best example of this as it combines beauty, innovation and a lightness of touch.

The Great Earthquake of 1884 damaged Layer Marney Tower but not seriously enough to destroy it completely. Alfred and Kezia Peache, brother and sister, are credited for leading the repair efforts as well as adding to garden to the south of the Tower

It is said that Layer Marney Tower is haunted. A common ghost story is that the ghost of Henry, 1st Lord Marney haunts his home and that he is unhappy the building was not completed to his liking. Some paranormal investigators suggest that the ghost favours one set of stairs in particular.

The gardens of Layer Marney Tower are impressive. Another popular ghost story is that the spectre of a gardener is sometimes seen where graves of small children where found.

It is also suggested that an author of ghost books is actually now a ghost himself and roams the hallways.