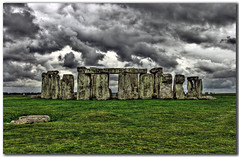 The Secretary of State for Culture, Media and Sport – Ben Bradshaw – confirmed today that the British Government will pump £10,000,000 into a new visitor centre for Stonehenge.

The English Heritage is pleased about this, as you might expect, and their Chairperson – Baroness Andrews – said; English Heritage is delighted at this financial commitment from the Government to secure the future of Stonehenge. Subject to planning permission, this means that the Stonehenge project, to restore the landscape and create a world class interpretation centre, can now be completed in time for the 2012 Olympics. Thanks to this investment, Stonehenge will finally have a setting which is worthy of its significance.”

Australian architects Denton Corker Marshall have won the contract to the design the centre which is expected to be surrounded by controversy.

The firm first submitted their plans in 2001 and won the internal competition in 2002. The project was scrapped in 2005. They had new plans for 2007 but those too were put on ice. This is the third time DCM have “won” the rights to built the low-impact building.

What do you think? Should we be building a visitor centre and encouraging even more visitors to Stonehenge? Isn’t a good thing the government is investing in the site?