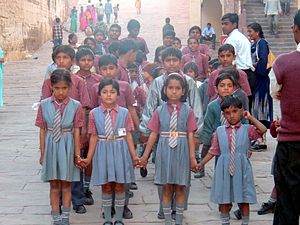 In Balasore, India, 18 school girls were taken ill after morning prayers. The girls are now refusing to return to Hidigaon Panchayat High School claiming that it is haunted.

The Times of India has the story and they report that the incident began with one student – known as Mansai to the press – who the first to behave strangely and become frightened. Shortly after her two more girls started to act in the same way.

“They started trembling and vomited before falling unconscious. Later 15 others behaved in a similar fashion forcing us to seek medical help,” headmaster Gadadhar Jena of the school told local press.

One of the students effected, Ranjita Behera, described her experience, “We had entered the class room after prayers. Suddenly, I experienced a strange sensation in my body and started trembling. I felt as if someone within my body was forcing me to behave erratically.”

Indian doctors discount the ghost theory and are pointing towards mass hysteria as the more likely cause.

What do you think? School girls being school girls, a haunting or mass hysteria?