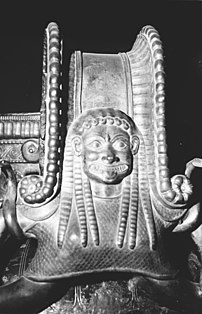 In the Iliad there is only one Gorgon who’s head was fixed to the centre of Aegis, the god’s magic shield.

The image of a Gorgon’s head is used in Apotropaic magic to ward off evil and as such often appears on doors, shields, armour, tombstones and walls.  Greek mythology also noted that the blood from the right side of a Gorgon could bring the dead back to life whereas blood from the left side of the monster is a deadly poison.

Anyone looking at a Gorgon would be turned to stone.

The Gorgons were sometimes drawn with boar tusks and golden wings although the image of a fanged and snake snaked woman was more common.  Sphinxes (or sometimes lionesses) are also often depicted alongside Gorgons in Greek art.

Which is your favourite Gorgon story? Have you been to Greece and seen any of the Gorgon architecture?