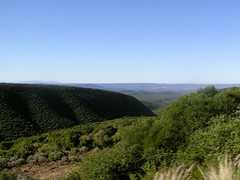 In South Africa, a Transkei woman has been shot dead after she was accused of practising witchcraft.

The murder occurred in Bityi, near Mthatha, and the South African Daily Dispatch reports that the 49-year old woman was shot four times.

Superintendant Mzukisi Fatyela told local press that the shooting happened at about 9:30pm on the Thursday night.

“Two balaclava-clad men entered the house and without saying a word opened fire on the woman, killing her instantly,” said Fatyela.

Transkei is in the eastern cape of South Africa. The name means “the area beyond the Kei River”. The area is becoming more popular with tourism and backpacker lodges are cheap and easily available. Both Nelson Mandela and Thabo Mbeki were born in Transkei.

Is your instinctual reaction tell you that this poor woman was shot because she was believed to be a witch? Or do you suspect the story is more complex than that?