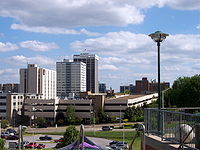 Fast food powerhouse KFC has donated $3,000 to the American town of Chattanooga to help repair potholes in the road. In exchange for the money the road repair crews use chalk sprays to mark the repairs as “Refreshed  by KFC”.

Until the temporary chalk logos wear off over time they act as advertisements for KFC. This has enraged the People for the Ethical Treatment of Animals (PETA) who approached Chattanooga with a counter offer.

PETA offered Chattanooga $6,000 and vegetarian lunches for the road crew. In exchange PETA wished to chalk the repairs with a caricature of KFC’s Col. Harlan Sanders and the phrase “KFC Tortures Animals”.

The offer was used by Chattanooga offices. A spokesperson for May Ron Littlefield said in an announcement, “We are not going to place ourselves into the middle of an argument between PETA and the KFC Corp.,”

PETA’s demands were described as “awkward”.

It it estimated that the $3,000 from KFC will be enough to repair almost 500 potholes.

What do you think? Are KFC taking advantage of towns with an offer like this? Or is this a healthy form of advertising where  every commercial message has to accompany an effort that builds the community.

What about PETA? Have they been treated badly b Chattanooga or did they expect this rejection? Was the rejection part of PETA’s publicity campaign?