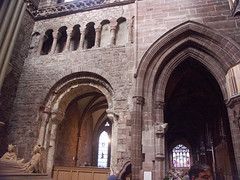 The remains of a teenage witch who was sentenced to death and her head removed for being a witch more than 700 years ago are to be given both a Christian funeral and burial.

Decapitation was used as a method to prevent eternal life in the dark ages. When the remains of the body were discovered two years ago, in unconsecreated ground near Hoo Saint Werburgh church, experts suggested that the teenage girl had been executed for being a witch.

Rev Andy Hardy, the vicar of Hoo, requested that the remains be given a Christian burial after he heard the story. It is also possible that the girl killed herself and killed up to die.

The Daily Mail has quotes from Harding;

‘We don’t know exactly what happened to her but what we do know is that her life came to an horrific end and even in death she was treated appallingly.

‘When I found out about it, I thought it was a tragic story and I felt a need to give her what had clearly been denied to her all those years ago, and that is a proper burial.

‘We want to put her back where she should have been when she first died, and we will be placing her with her head on her shoulders as it should be.

‘There was a belief in those days that you were buried facing east so that you were facing the resurrected Christ but in this case her head was removed to prevent her from eternal life.

‘Execution in those days would have been for such things as witchcraft, so if they had gone so far as to take her head off, she would have had to have committed a mortal sin.’

What do you think? Is Andy Hardy doing the right thing by giving the remains a Christian burial?